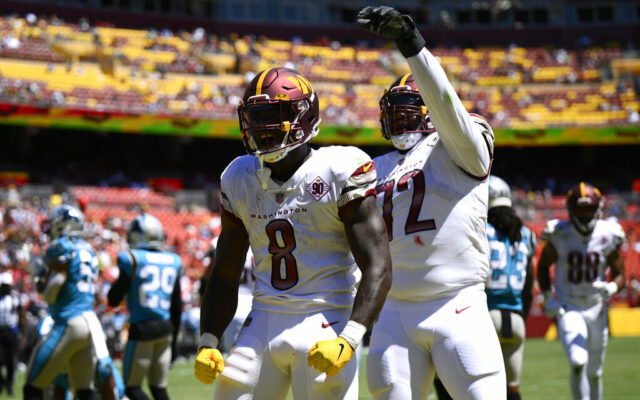 Washington Commanders running back Brian Robinson Jr. (8) celebrates his touchdown in front of offensive tackle Charles Leno Jr. (72) during the first half of a preseason NFL football game against the Carolina Panthers, Saturday, Aug. 13, 2022, in Landover, Md. (AP Photo/Nick Wass)

Commanders RB Brian Robinson Released From Hospital After Shooting Commanders running back Brian Robinson was released from the hospital on Tuesday, two days after he was shot multiple times during an armed robbery attempt. Robinson underwent successful surgery and is meeting with team doctors on Tuesday to determine what kind of rehab will be necessary to return to the football field. On Sunday evening, Robinson was shot twice in the lower body during an encounter with two people armed with handguns.  Police have identified potential suspects but have not made any arrests. Robinson was a 3rd round pick by the Commanders in this year’s draft, and appeared to have the inside track on the starting RB job. Will Robinson be able to play this year?  Should the team do something to honor him while he’s out of action?