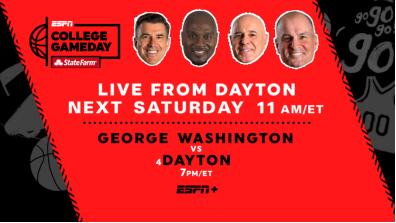 It’s been a historic season for the 4th ranked Dayton Flyers this season. The Flyers will close out the regular season next Saturday night against George Washington. For the first time ever ESPN’s College Game Day will be on campus starting at 11am.

A first for the @DaytonMBB Flyers! @CollegeGameDay is closing out the regular season next weekend with a new location…

🎥 @DickieV made the big announcement tonight in the arena

College GameDay Covered by State Farm is ending the regular season on high note, as the crew heads to No. 4 Dayton for the first time next Saturday, March 7. The traveling pregame show, with host Rece Davis and analysts Jay Bilas, LaPhonso Ellis and Seth Greenberg, will be live from Dayton’s campus at 11 a.m. ET on ESPN, ahead of the Flyers’ game against George Washington (7 p.m., ESPN+).

This will be Dayton’s first ever appearance on College GameDay. The Flyers climbed to No. 4 in the AP Poll this week, their highest ranking since the 1955-56 season. At 26-2, Dayton is off to its best start in program history, winning each of its last 17 games, tied for the longest active win streak in Division I.

Following the show, Bilas, Davis, Ellis and Greenberg will head to Durham, N.C., for North Carolina-Duke. Bilas will join play-by-play commentator Dan Shulman and reporter Holly Rowe for the Saturday Primetime presented by H&R Block matchup between North Carolina and No. 4 Duke (6 p.m., ESPN). The game will be delivered live in 4K resolution on DIRECTV, Altice and Comcast.