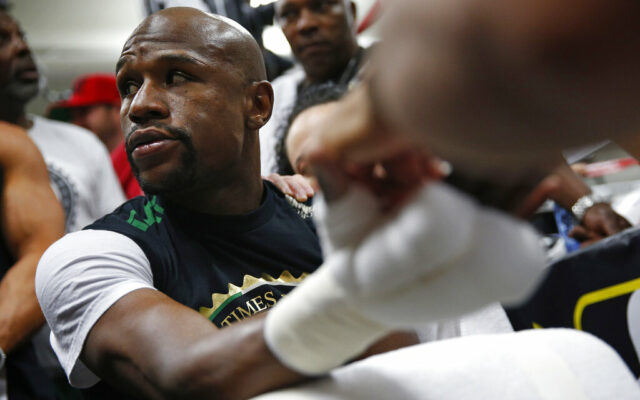 Boxer Floyd Mayweather Jr. gets taped up before a workout Tuesday, April 14, 2015, in Las Vegas. Mayweather will face Manny Pacquiao in a welterweight boxing match in Las Vegas on May 2. (AP Photo/John Locher)

Floyd Mayweather recently revealed that he has a new docuseries about his boxing career in the works called The Goat.

Floyd Mayweather is about to show the world a different side of him … the legendary 50-0 fighter has teamed up with Hollywood producers to make a "Last Dance" style docuseries called "The GOAT" https://t.co/MdGkyOXAYG

I just feel the world should see a different part of Floyd Mayweather. I think the people should see a different part of me.” He continued, “I want to be able to tell my story in my way. The good, the bad, and the ugly. I don’t want people to think I take certain pieces out and it’s all glory. There’s a lot of ups and downs in life every day. And there’s a lot of struggles. Not just with myself but with my loved ones. People gonna love it. Believe me.

He added, “Since the beginning of my professional career in 1996, I’ve been asked, ‘Floyd, let’s do a documentary on your amateur career. How your dad went to prison. How your grandmother was cleaning hotel rooms and offices to take care of you. And how you was living in New Brunswick, NJ. Seven of us in a one-bedroom.’ The story is just so amazing. Like I said before the people are going to love it.

There is no release date just yet for this new docuseries, but Floyd’s production team has already started working on it.

Which athlete would you like to see a docuseries on that hasn’t been created yet?