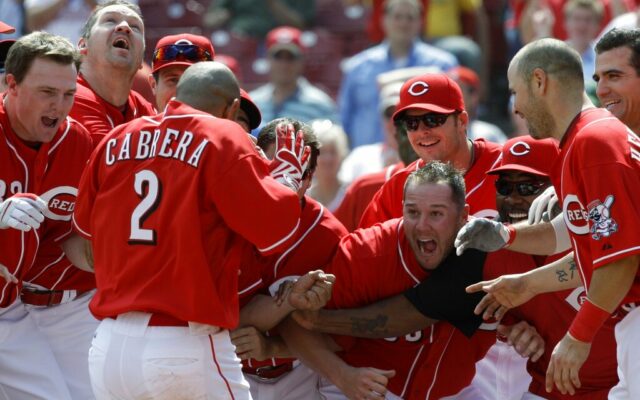 Cincinnati Reds' Orlando Cabrera (2) is greeted at home plate by teammates after hitting a walk-off home run off New York Mets relief pitcher Pedro Feliciano to give the Reds a 5-4 win in the bottom of the 10th inning of a baseball game, Wednesday, May 5, 2010, in Cincinnati. (AP Photo/Al Behrman)

MLB Lockout: Spring Training Officially Delayed Major League Baseball spring training is officially delayed. Pitchers and catchers on many teams were scheduled to report on Tuesday, but the ongoing lockout prevented that from happening. MLB owners and the players union remain at odds over issues such as revenue sharing. MLB commissioner Rob Manfred has continued to insist the 2022 regular season can start on time, but the clock is ticking as spring training games are scheduled to begin in two weeks and Opening Day is set for March 31. Do you have any Opening Day traditions? How likely do you think it is those plans will be postponed next month?