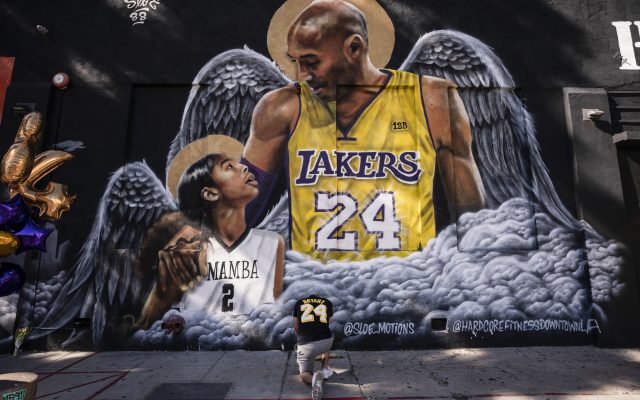 FILE - In this Jan. 26, 2021, file photo, Adam Dergazarian, bottom center, pays his respects for Kobe Bryant and his daughter, Gianna, in front of a mural painted by artist Louie Sloe Palsino in Los Angeles. Federal safety officials are expected to vote Tuesday, Feb. 9, 2021, on what likely caused the helicopter carrying Kobe Bryant, his 13-year-old daughter and seven others to crash into a Southern California hillside last year, killing all aboard. (AP Photo/Jae C. Hong, File)

Nike-Kobe Sneaker Deal Coming To An End One of the longest-running sneaker lines could be coming to an end after Nike and Kobe Bryant’s estate failed to come to an agreement on a new deal. It officially expired on April 13, 2021. Nike released a statement saying Kobe will always remain “a deeply loved member of the Nike family.” The latest Nike Kobe sneaker to date was the Nike Kobe 6 ‘Grinch’, commemorating Kobe’s final NBA game with the Lakers. When Bryant died in January of 2020, prices for his sneakers skyrocketed on re-sale sites. Do you think the same will happen again now?