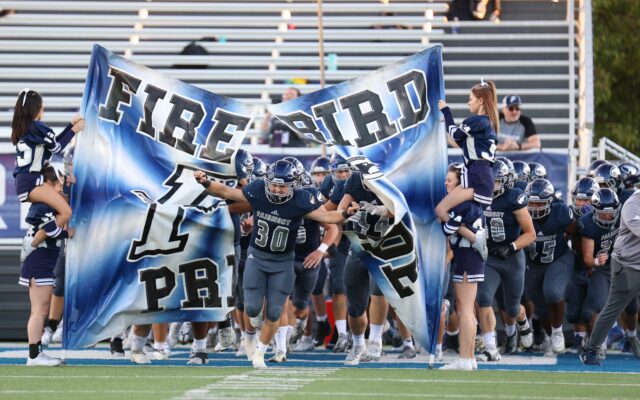 Dayton, Ohio (WING-AM) – The OHSAA Football Playoffs continue this weekend as the journey to the State Championship games in early December roll along. The Greater Western Ohio Conference had 6 of their 8 member schools qualify for the playoffs – The Springboro Panthers, Springfield Wildcats, Northmont Thunderbolts, Wayne Warriors,  Centerville Elks, and Fairmont Firebirds. Four of the six teams who qualified for the post season came away victorious last weekend with Northmont (Lost to Centerville 34-21) and Wayne (Lost to Fairmont 24-20) being eliminated.

The GWOC will at the very least have one team eliminated this weekend as two of the four remaining member schools will face off in a week 6 rematch as the Fairmont Firebirds play at the Springfield Wildcats Friday night at 7pm.

Fairmont shocked the Wildcats back in week six  winning 24-20 in Springfield and now the Firebirds will look to do it again on the road  Friday night.

For tickets to Friday night’s showdown read below:

ROUND 2 of OHSAA Playoffs

Tickets are required to be purchased via https://t.co/LFJvOJtlKA

It is advised that you purchase your tickets PRIOR to arriving at Springfield Wildcats Stadium.#WeAreFirebirds pic.twitter.com/POzYMyei6X