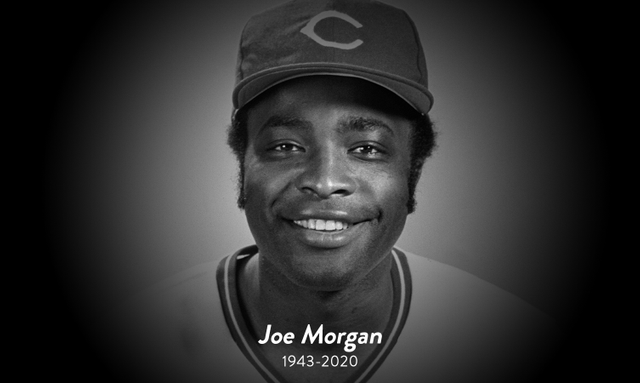 CINCINNATI – The Cincinnati Reds offer condolences to the family, friends and teammates of Hall of Fame second baseman Joe Morgan, and share in the loss of this beloved member of the organization. A special advisor to Reds CEO Bob Castellini and the club’s baseball operations department since 2010, Morgan died last night at age 77.

“The Reds family is heartbroken. Joe was a giant in the game and was adored by the fans in this city,” Castellini said. “He had a lifelong loyalty and dedication to this organization that extended to our current team and front office staff. As a cornerstone on one of the greatest teams in baseball history, his contributions to this franchise will live forever. Our hearts ache for his Big Red Machine teammates.”

A 10-time All-Star and 5-time Gold Glove second baseman, Morgan was elected to the Reds Hall of Fame in 1987 and to the National Baseball Hall of Fame in 1990. The 2-time National League MVP played for the Reds from 1972-79, during the glory days of the Big Red Machine.

Morgan won his first Most Valuable Player award in 1975, when he guided the Reds to a World Series victory over the Boston Red Sox, and he was MVP again in 1976 as the Reds swept the Yankees for their second straight World Series championship. Morgan remains the Reds’ all-time stolen base leader (406), and he finished his 22-year professional career with 268 homers, 1,133 RBI and 689 stolen bases for the Astros, Reds, Giants, Phillies and Athletics.