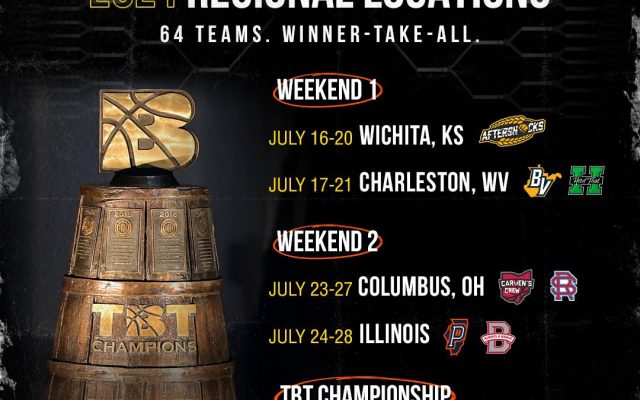 DAYTON, April 14, 2021 – The Basketball Tournament (TBT) today announced that the University of Dayton will serve as the 2021 Championship Weekend location for this summer’s tournament. Eight teams total from TBT’s four nationwide regionals will converge on the University of Dayton Arena from July 31-Aug. 3 to compete for TBT’s $1 million prize. All games will be shown live across the ESPN networks.

Dayton was slated to host TBT’s Championship Weekend in 2020 before the COVID-19 pandemic pushed TBT to create a 24-team “bubble” in Columbus, Ohio, making TBT the first sporting event in the United States to crown a champion amidst the nationwide lockdown. Among those 24 teams was Red Scare, the Dayton alumni team, led by 2013 Elite Eight member Devin Oliver, as well as recently graduated seniors Trey Landers and Ryan Mikesell. Red Scare made it all the way to the semifinals before being defeated by eventual champion Golden Eagles, the Marquette alumni team.

In the hopes of having the opportunity to play in front of a home crowd, Red Scare has officially committed to compete in TBT for the third straight year. Initial commitments for the 2021 roster include Devin Oliver, Trey Landers, Ryan Mikesell, Kyle Davis, Darrell Davis, and Kendall Pollard. The rest of the team will be announced at a later date.

“Being able to play for Red Scare and continue to represent the University of Dayton is always one of the highlights of my summer,” said Red Scare forward and Dayton alumnus Devin Oliver. “Having the opportunity to play at UD Arena again would be incredibly special, and we can’t wait to hoist TBT’s trophy in front of the best fans in college basketball.”

“Dayton is a basketball town. Our fans have enjoyed following our Red Scare alumni team in The Basketball Tournament the past couple years,” Dayton men’s basketball head coach Anthony Grant said. “The opportunity to come home and play in UD Arena is very exciting for the players, and for our fans. We can’t wait for TBT to experience the passion and excitement that our community has for basketball.”

“A couple of years ago, we experienced how passionate Dayton fans are when they came out and supported the Red Scare in Columbus”, said TBT founder and CEO Jon Mugar. “They easily grasped our brand of high stakes, Elam Ending basketball.  We’re excited to partner with the University of Dayton to bring the championship to Dayton this summer. It’s easy to see UD Arena becoming its home for many years to come.”

TBT 2021 will once again feature an open-application process, allowing any team or group of players in the world to apply through TheTournament.com May 1 – June 15. The 64-team, single-elimination bracket will be released on June 28. The field is expected to consist of international pros, college alumni teams, ex-NBA players, future NBA players and others. The 63 game event will take place July 16 – August 3.

For the fourth year in a row, TBT games will feature the Elam Ending, the end-of-game format adopted by the NBA All-Star game for the past two years that eliminates the game clock after a certain point and features teams playing to a Target Score.

Tickets for TBT summer events can be found at thetournament.com/tickets. Tickets will be sold at limited capacity on April 14, in accordance with all local health and safety regulations. Further tickets may be released at a later date, pending updated guidelines and availability.