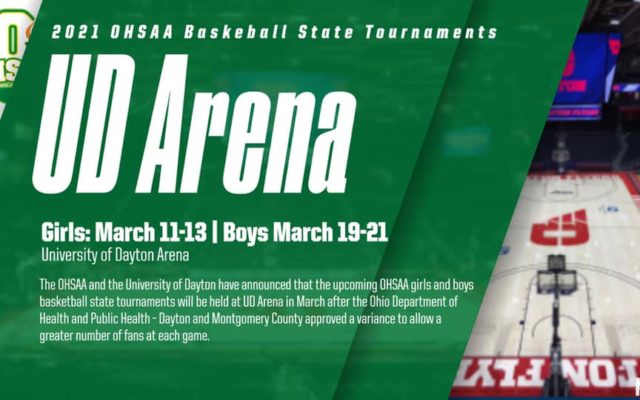 COLUMBUS, Ohio – The Ohio High School Athletic Association and the University of Dayton have announced that the upcoming OHSAA girls and boys basketball state tournaments will be held at UD Arena in March after the Ohio Department of Health and Public Health – Dayton and Montgomery County approved a variance to allow a greater number of fans at each game.

The divisional order of play this year is Division IV, III, II and I. Spectrum News 1 will televise the championship games, while the semifinals will be streamed live through OHSAA.tv.

“We are so excited that the University of Dayton has such a strong desire to host our basketball state tournaments and for all they did to receive a variance to allow more fans to attend,” said Doug Ute, OHSAA Executive Director. “We thank the health department officials for their cooperation as we worked through this request and we are committed to following the safety protocols they have in place. Our schools have gone through so much since last March and we are thrilled that the season will culminate with the state tournaments at such a great venue as UD Arena.”

The specific number of fans permitted per game will be announced at a later date.

“We thank the Ohio Department of Health and Public Health – Dayton and Montgomery County for working with us to provide high school students with the opportunity to play here at UD Arena,” said Scott DeBolt, University of Dayton Senior Associate Athletics Director and Executive Director of UD Arena. “The state tournament is an experience that the players, coaches and fans will remember for the rest of their lives and we are proud to be able to host these great events this year.”

Last May, the OHSAA announced the University of Dayton would host the OHSAA girls basketball state tournaments in 2021, 2022 and 2023, but the COVID-19 pandemic put the location of the 2021 state tournament in question due to spectator limitations and costs associated with the tournament.

“We especially thank Scott DeBolt and the staff at UD Arena for working with us on the financial side to allow the state tournaments to happen there this year,” Ute said. “We all can’t wait for the future when we can get back to normal attendance and pack the arena for the state tournaments.”

The 2021 OHSAA boys basketball state tournament was scheduled to be held at St. John Arena at The Ohio State University, but that facility is not available due to the pandemic.