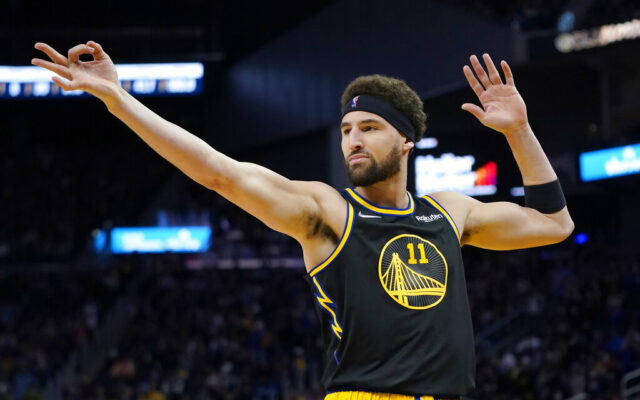 Golden State Warriors guard Klay Thompson gestures after shooting a a 3-point basket against the Denver Nuggets during the second half of Game 1 of an NBA basketball first-round playoff series in San Francisco, Saturday, April 16, 2022. (AP Photo/Jeff Chiu)

‘Fake Klay Thompson’ Banned From Chase Center The YouTuber known as ‘Fake Klay Thompson’ has earned himself a very real ban from the Chase Center. The Fake Klay – real name Dawson Gurley – has been impersonating Thompson for years, but took things too far with his latest stunt – where he breezed past security and took a few shots on the court during pregame warmups before Game 5 of the NBA Finals. As a result, Gurley was handed a lifetime ban from Chase Center and any future NBA games. Gurley himself felt the ban was unfair, tweeting “Why should I be banned because their security is incompetent?” Do you think Gurley deserves a lifetime ban?  What should happen to the security who let him pass?