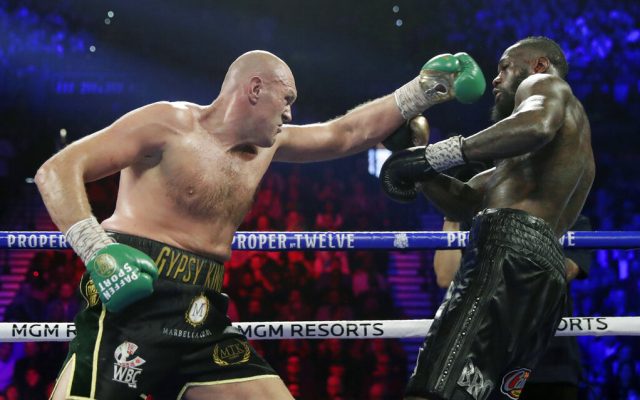 FILE - In this Feb. 22, 2020, file photo, Tyson Fury, left, of England, fights Deontay Wilder during a WBC heavyweight championship boxing match in Las Vegas. An all-British world heavyweight title showdown between Anthony Joshua and Tyson Fury in 2021 is a step closer. Fury said Wednesday, June 10, 2020, that an agreement has been reached with Joshua's camp on a two-fight deal between the current holders of the heavyweight belts.(AP Photo/Isaac Brekken, File)

Tyson Fury Confirms Unification Bout Vs. Anthony Joshua On For August 14th Tyson Fury says his long-awaited collision with Anthony Joshua is officially on for August. Over the weekend, Fury tweeted that the heavyweight unification fight was “100% on” for August 14th in Jeddah, Saudi Arabia.   The match is the first of a two-fight deal and will unify the WBA, IBF, WBO, and WBC titles. Fury says the bout will be “the biggest sporting event ever to grace the planet Earth”. How closely do you follow boxing these days?  Why has its popularity fallen off compared to MMA?