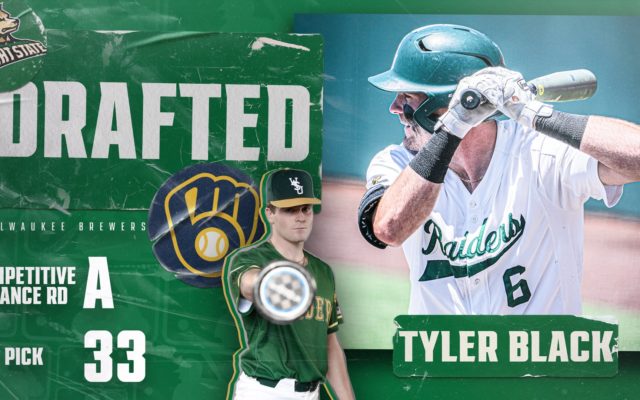 DENVER/DAYTON – Wright State infielder Tyler Black was selected by the Milwaukee Brewers with the 33rd overall pick in the competitive balance round A on Sunday night in Major League Baseball’s 2021 first-year player draft. Black, a native of Toronto, Canada, becomes the 38th Wright State player taken in the MLB Draft and is the second-highest in program history.

Black’s Sunday selection at No. 33 overall is bettered only by Wright State Hall of Famer Brian Anderson as the highest drafted player in Raider history. Anderson, a right-handed pitcher, was selected third overall by the California Angels in 1993. Black becomes the highest selected Raider position player in program history, surpassing former standout Keith Gordon, who was taken 47th overall in the second round of the 1990 Draft by the Cincinnati Reds.

A three-year player for the Raiders, Black started 104 of his 113 games in a Wright State uniform, tallying a career .353 batting average with 104 total runs driven in, 26 doubles, 21 home runs and seven triples. This spring, he hit .383 with 21 multi-hit games, including a career-best five hits against Purdue Fort Wayne in May, along with 59 RBI and double-digit totals in both doubles (14) and homers (13).

Black was a first team All-Horizon League performer this spring and was named an All-American by ABCA/Rawlings, D1 Baseball and Perfect Game/Rawlings (third team) while earning a spot on the All-Knoxville Regional Team after his play in the NCAA Championship. Black was named the No. 7 hitter in the country by D1 Baseball in its analytical breakdown rankings of its Top 100 Hitters. In his first season at Wright State, Black was named the Horizon League’s Freshman of the Year while earning a spot on the Horizon first team and all-freshmen teams.

ICYMI: Last night, Tyler Black became the highest selected Raider position player in program history when he was taken with the 33rd overall pick by the Milwaukee Brewers in the 2021 #MLBDraft.#RaiderUP | #Raidergang | #RaiderFamily pic.twitter.com/Tkbw1EFeyV